Darryl Reeves, a third generation metal worker, is owner of Andrew’s Welding and Blacksmith Shop in New Orleans’ Seventh Ward. Regarded as a natural, Reeves is well known for his creative contemporary steel and brass staircase railings and furniture, and is revered for his historic restorations of antique iron work at historic sites. His public commissions include the restoration of the ornate fence at the Presbytery in Jackson Square in the French Quarter, fabrication of a new identical fence (using old techniques) for its sister building, “The Cabildo,” and the disassembly and reconstruction of the massive gate at the Chalmette National Cemetery which dates to 1872. 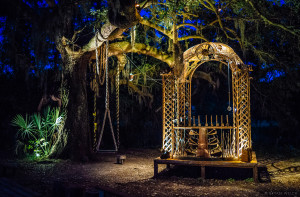 Exploring the New Orleans Village Where You Can Play the Buildings